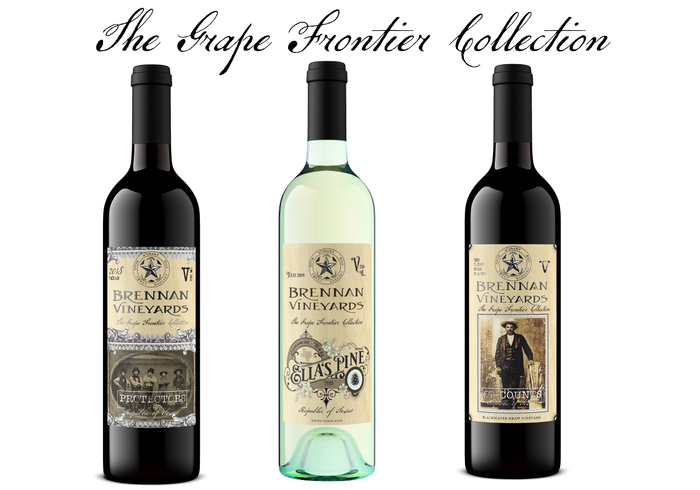 This inaugural wine in ‘The Grape Frontier Collection’ is a tribute to James Madison McCrary whose 1876 historic homestead is now home to Brennan Vineyards. McCrary was a true frontiersmen, avid horticulturist, and businessman; having opened the town’s first general store and cotton gin. McCrary went on to serve and protect the people of Comanche as a Ranger of the Company D Minute Men Comanche County, from May 1872 to June 1873 and later as a Ranger of the Frontier Battalion.

With this wine, we tip our glasses to ‘The Protectors’.

Ella's Pine is a tribute to the house that we at Brennan Vineyards call home. The McCrary House is adorned on its south sde with a Loblolly Pine tree which stands proud to this day. History has it that eleven years old Ella carried this pine tree seedling all the way from Alabama to her new home in Comanche, Texas. With a little piece of her homeland, the McCrary House is the place she grew to call home along side her nine children and husband, James Madison McCrary.

Comanche has rich heritage in the Texas Frontier. From being a trading post on the Old Corn Trail, to its history with the  infamous outlaw John Wesley Hardin and his shoot out with Sheriff Webb. Hardin was finally captured in Gainsville, Florida and returned to Texas where he was tried to 27 counts of murder. The jury found Hardin guilty and sentenced him to 24 years in prison. While in prison, John studied law and wrote an autobiography. After completing 17 years of his sentence, Hardin was pardoned on good behavior and went on to pass the state bar examination where he obtained a license to practice law.